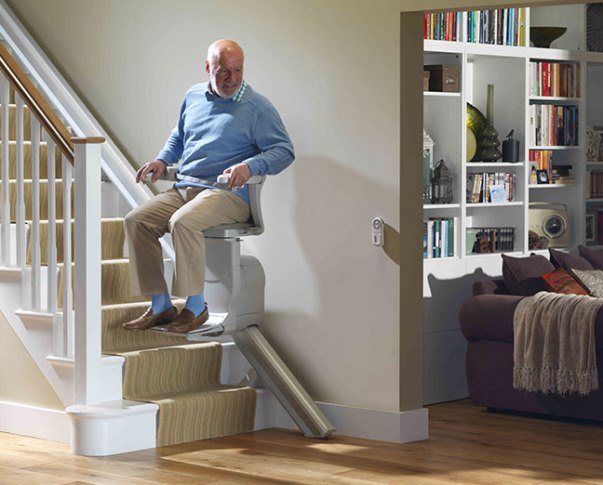 Stairlifts – Technology for a Life Without Steps

When stairs become an almost insurmountable obstacle, a stairlift can bring back lost mobility in your own four walls. Instead of having to move to another apartment, you can simply stay in your familiar surroundings and climb the stairs with the help of modern technology.

In this article we have put together a lot of information about stairlifts for you: Learn more about the technology of modern inclined stairlifts (the official name for stairlifts) and about the structural and personal requirements necessary to install a stairlift in your stairwell or your apartment.

Whether seat lift, standing lift, platform lift or lift – stair lifts are available in numerous different designs, which we present to you in detail in our advice articles. And since the topic of safety is always particularly important when it comes to stairs, we will introduce you to the basic standards and safety regulations in more detail.

Stairlifts are – depending on the model, design and the structural requirements in the stairwell – associated with relatively high costs. If you want to get a first impression of the costs you have to reckon with for the lift itself, transport, assembly, maintenance and subsequent dismantling, you will find manufacturer-independent information here.

Stair lifts are technical devices that are used to move loads and people over a staircase structure. They enable people who are no longer able to climb stairs on their own, but still live in their apartment or house and lead a largely self-determined life.

From a technical point of view, stair lifts are so-called inclined stair lifts, which consist of three elements: a platform that enables a person to be transported safely and comfortably over the steps, a drive and a support and guide rail that is attached to the stairs or the wall . The drive moves the platform up or down along this rail. The direction of travel and speed are determined – in most cases by the user himself – with the help of a control unit.
Stair seat lift © Ingo Bartussek, fotolia.com

Stairlifts can be installed in buildings as well as outdoors or in the outdoor area of ​​the house. In the case of an outside lift, however, additional measures must be taken to protect the stair lift and its mechanics and electronics from the effects of the weather.

There are three variants of the platform to choose from: The simplest and therefore also the cheapest version is a walking stick , suitable for people with only slight or temporary restrictions on movement.

If the movement restrictions are stronger and longer standing is no longer possible, a seat lift is the better choice. A seat with fold-down armrests and a footplate is also mounted on the platform to ensure safe transport.

A platform lift is suitable for wheelchair users, as it offers a larger platform compared to a standing lift on which the wheelchair can find sufficient space. So that nothing can happen while driving, only the brakes on the wheelchair are applied before starting the journey. An adjustable railing and movable folding elements on the base plate provide additional security and prevent the wheels from slipping or rolling away while driving.

The type of platform also determines the design effort and costs. Because the more technically sophisticated the platform is, the more complicated the assembly becomes. A pedestal can be realized with the comparatively least assembly effort, since only a relatively small platform is required here, which is designed for a load-bearing capacity of up to 150 kilograms.

A seat lift is a bit more complex because a stable and flexible seat has to be installed in addition to the platform. Adjustable armrests, a foldable foot section and the ability to rotate the seat increase costs and assembly work. At up to 160 kilograms, the load-bearing capacity is roughly equivalent to that of a floor-lift. The additional reserve is required for the seat.

Platform lifts represent the most technically demanding solutions and accordingly require higher construction and assembly costs. But these stair lifts can also transport weights of more than 300 kilograms – enough for a wheelchair user with an accompanying person. However, the space requirement of this lift solution is also significantly higher than with the other variants, which is why platform lifts are usually designed in such a way that the platform can be folded up. It is only folded down shortly before use so as not to permanently block access to the stairs.

Which type of guide rail is suitable depends above all on the structural requirements , i.e. specifically on the position, length, gradient and structure of the stairs. The easiest way to assemble is a straight guide rail indoors, which is mounted directly on the banister, on the stairs themselves or on a wall of the stairwell.

If the stairs are not straight but have a curve or a twist, the guide rail must also be shaped accordingly. Even then, the rail is mounted on the banister or on a wall, which is technically more complex and therefore more expensive to implement with curved stairs.

So that a stairlift – whether straight or curved – can be installed, the staircase and stairwell must meet certain minimum requirements:

The drive of a stair lift

Stairlifts are powered by a powerful electric motor, which is usually mounted directly below the platform or under the seat. With a straight guide rail, a rack and pinion gear can be used, which is attached to the stairs themselves and consists of two interlocking elements for power transmission: a straight element with a series of bumps (teeth) and a rotating gear.

In the case of curved stairs, on the other hand, a friction wheel drive with single or double tube systems is often used, which is mounted directly on the wall or as a replacement for the banister. This technology offers the advantage that cornering can also be implemented with it.

The control and operation of a stair lift is usually mounted directly on the lift . With a seat lift, the controls are integrated into the armrests so that they can be comfortably reached by the person being transported. In the case of platform and pedestal lifts, they are also attached to the platform itself. Additional mobile remote controls increase flexibility and security. For example, they can be stored at the top and bottom of the stairs or – with an outside lift – taken with you in the car.

It is usually controlled using a small control stick (called a joystick), which can be operated with the fingers or the entire hand. If it is tilted in the desired direction of travel, the platform starts moving and continues to travel as long as the joystick is held in the travel position or until the end of the guide rail is reached. The stick runs smoothly, is easy to reach by the operator on the lift and is intuitive to use. Its location can also be determined individually to meet the needs of left and right-handers alike.

For people with motor problems, e.g. B. Parkinson’s disease or paralysis, the lift can also be equipped with sensors or toggle switches instead of joysticks. It can also be controlled by an attendant using the remote control.

The batteries are sufficiently dimensioned to theoretically secure the operation of the stairlift even in the event of a longer power failure. A spare battery, which is charged and stored independently of the stairlift, offers additional security and reserves. Incidentally, the power consumption of a stairlift is relatively low: it corresponds roughly to that of a conventional light bulb.

Various technical safety systems are integrated to ensure the safety of a stairlift for the user as well as for other people and the environment. It starts with the superstructures for the user: the seat, handles, footplate and control elements are constructed to be stable and have a non-slip coating. Seat lifts often also have a seat belt that can be worn while driving.

During travel, mechanical and electrical safety systems ensure that the stairlift also descends at a continuously slow speed and does not accelerate or decelerate suddenly at the beginning or at the end of the journey. And if something unforeseen should happen during the journey, an emergency switch can be activated, which stops the stairlift immediately, making it possible to get on and off safely at any time.

Another possible hazard is a collision while driving, i.e. a collision with other people or objects on the stairs. To avoid this risk, most models are equipped with sensors and distance meters that measure the area around the platform and the guide rail while driving. If an obstacle is detected, the lift stops immediately and prevents people from being injured or the lift and its surroundings being damaged.

In order to secure the lift against unauthorized use, the control and / or the platform can be secured with a key or alternatively with a PIN code. This ensures that only certain people in the house have the opportunity to use the stairlift or make it functional.


Medical Disclaimer: The opinions in this article do not constitute medical advice. Please consult a registered physician before taking action based on the information found in this article.
Earnings Disclosure: Bathliftreviews may earn commissions from Amazon when you purchase products from Amazon links on this page.